Such poor form...deregulate the offshore? Seems like a bad idea

Posted by Lonenewfwolf at 9:23 AM No comments:

Towards an Atlantic-wide deregulated electricity sector. The story of NL Power & NS Power

From 'The energy anti-trust handbook' via google books 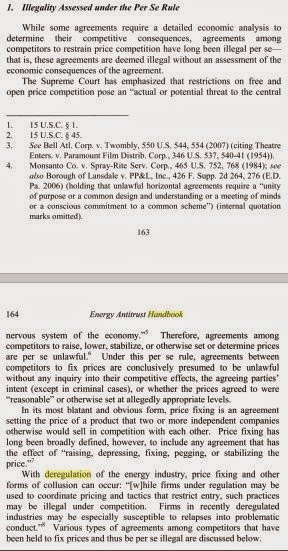 Plugging in Atlantic Canada: AIMS/ECANS first major conference on electricity
How will competition, deregulation and privatization in the continental electricity market affect us?

NAFTA and proportionality: A devil's bargain

For the next piece...Historical timeline of deregulation in modern NL, the players involved and where they were at specific points along the path towards deregulation of each specific sector. NL Power & NS Power. Connections of private interests to both main political parties. Offshore tax havens. More on price fixing and hamstringing regulators. Pipelines. Natural Gas. Water Markets...
Posted by Lonenewfwolf at 7:52 PM No comments:

The wet dream of NL Inc. for the past 15 years or so years has been to put in a natural gas export pipeline from the offshore oil & gas fields of eastern Newfoundland to points west. The natural gas pipeline system which extends up into Nova Scotia from the United States has been eyed greedily by both liberal & conservative governments in the past two decades, but no one has been able to make a deal happen for the gas offshore NL, to get the deal 'just right'. To fit all the pieces together and bring it home for private shareholders and institutional investors in not only canada's but the world's largest energy companies took alot of doing. It appears that it has potentially involved the trading off of public assets, those being not only the assets involved in the muskrats falls hydro electric dam and the related transmission infrastructure but indeed the people of NL's publicly owned utility NL Hydro.

The offshore gas fields in NL are reported to contain upwards of 60 Trillion cubic feet of natural gas, yes that's trillions with a T (http://newenergynl.ca/2011/06/21/20110621-2/ & http://www.northernlightsottawa.com/presentations/friday/PaulBarnes_CAPP_EDMS-202549-v1-Northern_Lights_presentation_February_2012.pdf).

Now, as a forester / farmer I don't pretend to know much about the technical aspects of the oil & gas sector but what I do know is it has the richest companies in the world operating within its folds, and those same companies are operating within my province on resources that are at least in part governed by the rules within our jurisdiction. With all that money comes influence and an ability to make things go your way. Complicit governments writing enabling legislation, so these massive corporations can operate outside the oversight of democratically elected legislative representatives is a major issue around the world. Here in NL recent legislation such as the energy corporation act of 2007 and its sections 5.4-5 are a big part of the problem, as is bill 29 and section 31 of its parent bill of 2002.

My research for the past decade has been focused on the issues around water privatization and hydro electric dams, and most recently has moved onto include the links those two issues have to hydraulic fracturing expansion in northeastern BC. I followed the water issue as a stand alone issue locally starting in 2003 through to the expropriation in 2009 of abitibi bowaters assets in central NL. There were concerns being raised at the time by a number of groups around the water rights granted by the harper administration under nafta where water rights appeared to be both granted and taken all in one swoop. Most of this kerfuffle is explained in the last post on this blog.

What I failed to recognize when I last posted was the issue of a gas pipeline system for the natural gas offshore NL, and the potential for massive profits off that resource. Once I saw that it didn't take long to find the studies left behind by the past liberal government for an offshore pipeline system and to begin to make the connections to the investors and executives piling up around the deal emera has with nalcor for the muskrat falls project to see there is way more to this deal than met the eye. Water is still a key piece but not for local NL players, they are just being used to set it up for the larger deal for Canadian water. Going on underneath is the deal with petronas in BC for the montney shale gas expansion and Montney Water Project, which is the real prize for the current crowd of corporate elite pulling our democracies strings.

What I've discovered appears to point to a rather large private investment in a pipeline expansion project by groups like exxon mobil, spectra energy, encana and snc-lavalin to get at the gas offshore NL under the guise of a hydro-electric & transmission deal built by the very people who appear to have been in the background helping put together the pipeline plan. Not all parties may be aware of all the workings inside the deal, but certainly some must know what is being sold, and what is being purchased as multi-billion dollar contracts are signed for the publicly administered natural resource wealth belonging to the good people of Newfoundland & Labrador.

The issue of water privatization is certainly in the background for local brokers when they eye the trillions of cubic feet of natural gas, but the initial profit from the gas resource is merely the driving force for the greed and underhandedness witnessed around the whole muskrat falls debacle. The real treasure is undoubtedly the water for those who have the security of billions in the bank and all the power one could imagine that wealth brings, for those amongst us who control the water control the fate of humanity. We only need look to the conflicts in the middle east and dig a little to find water issues being a major underlying factor in most of the disputes, though you will not find many people or reports discussing it...its simply too hot a topic.

My issue with what I see happening in NL around this pipeline deal is that Canadian water is being threatened with privatization. This threat is coming from the 'investor-state dispute settlement' mechanisms built into the new free trade deals being shoved down our throats, as well as the legislation which may have been abused under the guise of democratically elected government to help enable that privatization using greed and belief in 'the market' as both motivating factor and justification. Its not good enough.

If we are to progress as a species and continue forward together through the challenges we will face in the future whether that be a rapidly warming & volatile climate, ocean acidification, desertification, failing agriculture systems etc. we must go forward together, not separated by greed and fear.


More to come...but while you wait here are a couple links...

Update insight..10.10.2018 re: 'power from shore'
Equinor flips a switch on Johan Sverdrup
Norwegian Minister of Petroleum and Energy, Kjell-Børge Freiberg, on Tuesday officially opened the power-from-shore solution, which will provide the Johan Sverdrup field in the North Sea with electricity for more than 50 years. https://www.offshoreenergytoday.com/equinor-flips-a-switch-on-johan-sverdrup/ 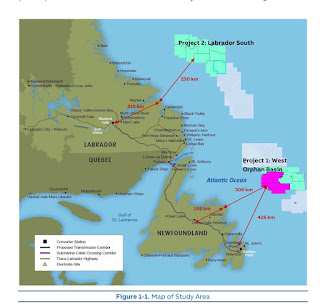 Notes for next piece
Outside of the offshore gas is the gas onshore in NL, the private water rights that may be assumed by emera and perhaps even Kruger Energy for their Deer Lake Power dam on Junction Brook. The water behind that dam (Grand Lake) holds alot of water and the watershed includes a large portion of the surface area of western NL.

Nova Scotia gas export deals for $35 billion dollar contracts cannot be linked to private water as has been done in BC on williston lake. We cannot get out of $35 billion dollar contracts by paying out, remember Harper has stated it would be the responsibility of provinces in the future (via the abitibi settlement). There is substantial risk inside this deal and it needs complete review before any more contracts are signed.

Believe it or not there is also a plan for atlantic-wide electricity deregulation inside this whole big mess which will involve both NL Power (Fortis) & NS Power (Emera) that could have inside of it another layer of the offshore natural gas deal for gas distribution on the island. Interesting that Fortis has not showed itself up to this point in the 'Muskrat Falls' fiasco, though they are sitting on CH Hudson in New York where the HVDC line from Quebec plugs in. Its owned by Balckstone but was originally a douglas capital / TDI line when NALCOR signed on with with them in 2011. GDFSuezo bought ventus wind who have a tremendous amount of canadian wind under permit, but as yet unbuilt. Ventus were the original partners with the metis in labrador for a 5000W wind farm....oh so interesting. Riverbank power and pumped hydro is also very interesting and will be explored in future posts.
Posted by Lonenewfwolf at 12:28 PM No comments:

Lonenewfwolf
I am, and will always be, a proud Newfoundlander. Returned from the mainland to find home and a place in my community where I can make a difference with the skills and abilities I have been given the priveledge of developing through a life of doing what I saw fit.

In the years leading up to Harper's majority the neo-con boys were busy. They were busy setting up contracts, trade deals, pipelines, tr... 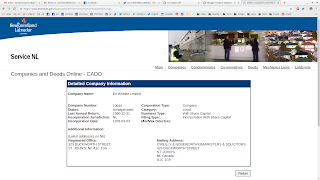 traffic in the shire